Last Father’s Day my cowboy got this really good surprise in the mail from one of the western stores in Alberta, a pair of brand new Wranglers (much needed). How that all came about was because the store had a contest for Father’s Day and one of our girls, Jazlyn, wrote in and won the contest, the prize being the wranglers and a rain poncho.

“My dad is the greatest because he taught me the responsibilty of work, honest true hardworking work. He taught me that I can do anything if I just put myself out there and tried, taught me that it is ok to fail, because that would give me another opportunity to try again. He was the one who I could always call if I needed to talk and get something off my chest, he taught me how to rope and how to bring down a cow if she needed treating. My dad is the greatest because he won’t go against mother nature, if a cow goes one way easier than another, it’s ok eventually it will get where the others are. Dad sure could use another pair of good hearty jeans since he works as lease rider, we all know that a poncho would be nice for those rainy days out in the saddle to. I love my dad!”

Thanks Sweetie, he really appreciated and needed those jeans. 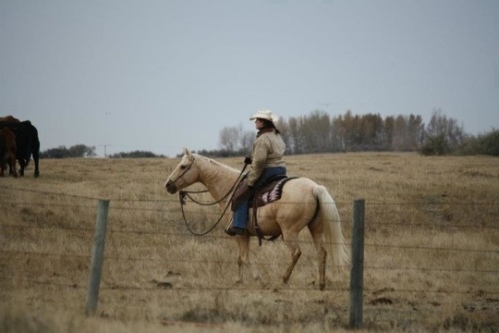 An addition to the post:
I appreciate your compliments on a job well done but I need to explain something. We can’t take credit for this wonderful daughter. You see, she was almost grown when she adopted us. I don’t know who to give the credit to: her dad and step mom, or her mom and stepdad, her extended families, loving grandparents, God (for sure him)? She is a really special child, now turned mom, and I’m not sure we deserve how much she loves us (or all such kindnesses) but she does and we love her and count her among our own.

I like Sundays; I always learn something really good. Today it was the principle of compensation, something I never remember anyone, ever, mentioning before. Except maybe in a story my cowboy’s mother used to tell.

She said her mom would offer to pay her a dime (a lot of money back then) for doing the dishes. Then when she was done her mom would say, do you want your dime now or a dollar when you get to Heaven. She said she always picked the dollar.

So I thought well, that kind of seemed like a rip off but now, that I look back, I see that her mom was teaching her, in a way, about this principle of compensation.

A guy I have a lot of respect and admiration for(Joseph B. Wirthlin) said: “The Lord compensates the faithful for every loss. That which is taken away from those who love the Lord will be added unto them in His own way. While it may not come at the time we desire, the faithful will know that every tear today will eventually be returned a hundredfold with tears of rejoicing and gratitude.”

Knowing how Heavenly Father operates I know in my heart that’s true. My cowboy’s grandmother knew about this principle of compensation and now I do too.

Last day of take out and what a pretty day. A lovely warm south west wind, 16 degrees Celsius warmer than first thing Wednesday morning when we gathered
up those first two herds.

I teased one of the young fellows so much about not having a cowboy hat that today he came with a nice new palm and he looked good in it One of my favorite kids, Leonard he’s a pleasure to ride with, that boy. He’s grown up so much since we first met him and has the cutest new wife now.

Everything went easy into the corrals. The only bobble in the whole day was a little talk I had with another young fellow. He needed something said to him. As far as I’m concerned if you have a problem with how things are run and think your so much smarter than everyone else take your ‘suggestions/observations to the board and deal with it through proper channels. Don’t grumble the ear off the lease rider.

I think they are just complainers and nobody pays any attention to them anymore. But they aren’t picking on the guy that I know how hard he is working out there.

Did I ever tell you I don’t take abuse well? And you might not like it but you will always know right where you stand with me. I’m pretty much ‘what ya see is what ya get’, everything up front-nothing behind your back. I try to be firm, friendly, and fair but . . . if something needs saying I’ll say it. Besides, I think I’ve worked hard enough and lived long enough that I’ve earned the right to say a few things.

But in all it was just a really nice day. 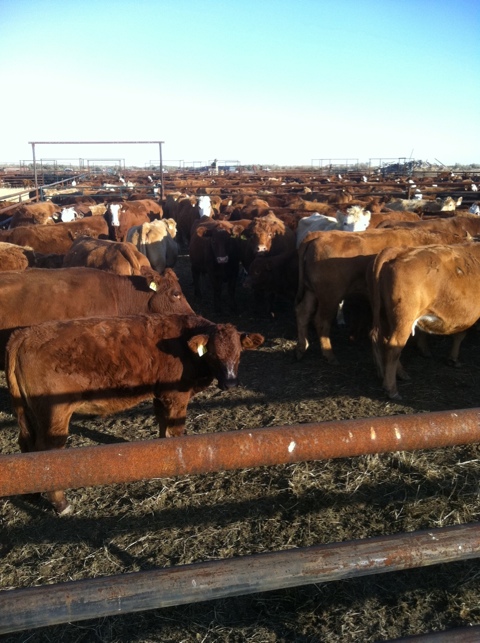 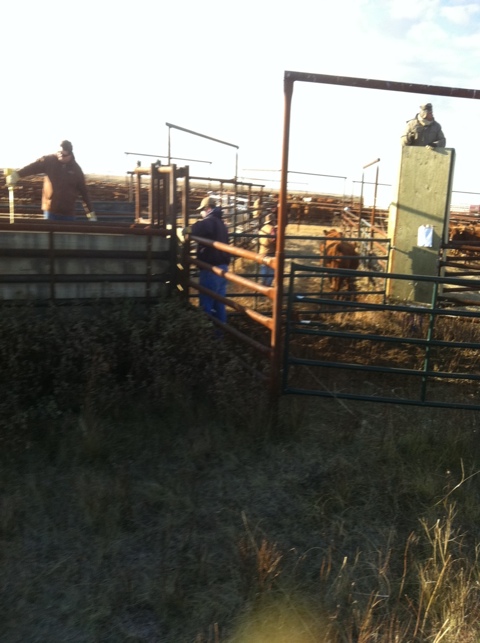 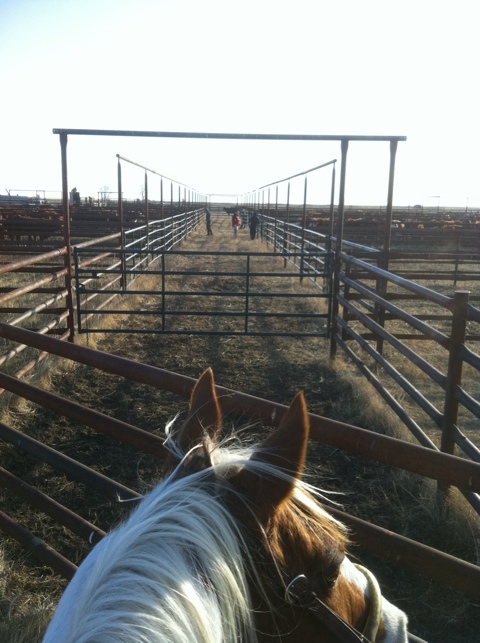 That’s how quiet it will be without the cows after tomorrow, deathly quiet. I suppose that’s appropriate for the time of year 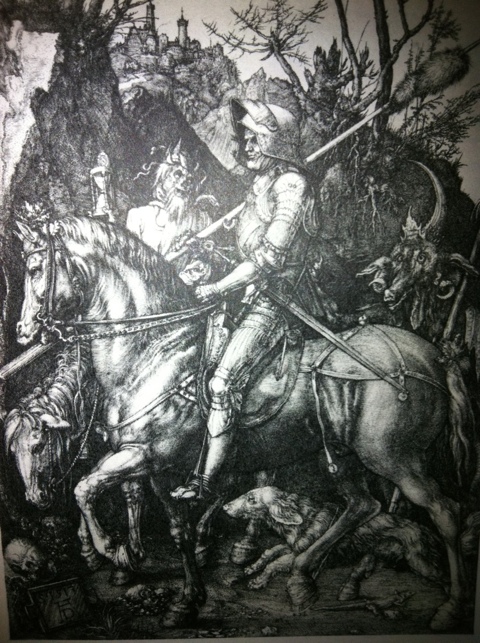 Death, Knight, and the Devil by Albrecht Durer

Odd name for a dog but it means the same as Bachgen (boy) but in Swedish instead of Welsh.

It was his first day moving cows and he was so good at it. Most collies are, but this one is deaf and I didn’t know how it could work. But I took him with Gus and Pojke watched so closely and just figured out what to do from what Gus and I was doing. And never got lost which happens to most of our pups the first time out with us. I’m very impressed with how brave he is as well and enthusiastic. And he is so sweet.

He has only two commands “come” which I tap my knee to tell him and “out” which is a flick of my hand. The only hard part is getting his attention. Someone said they had vibrating collars for that but I’ve only ever seen the shock collars which I would never use on a dog. Does anyone knows where I could get one?

Waiting for the sun to come up. I can’t figure out why we have to start round up so early. It’s blinking cold at first light.

I kind of hated to step out of the warm truck but the work’s gotta get done: rain or snow, on the hottest days or the coldest mornings. Well at least it wasn’t foggy like last year. That was tough when you can’t see the cows.

This is every one riding back out for the second pull of cows. We were all done by 8:45 am and I got to come home, unsaddle our horses, and do chores that didn’t get done cause we left so early. And now I’m siting with my feet up having a cup of egg nog. Maybe getting up at stupid o’clock isn’t that bad.

As you know I have family in Wales. In fact way more than on this whole side of the ocean. We have had a few precious visits from over there: Auntie Gwladys, and cousins Alun (and his family) Karen, and Tom.

Tom came twice to visit and stay with us so I know him the best. We have lots of fond memories of each other. Well, he phoned a couple of evenings ago at around 8:30 pm. I can’t tell you how much it meant to me that he got up at 3:30 am, his time, to do that.

He is looking forward to my visit in the spring 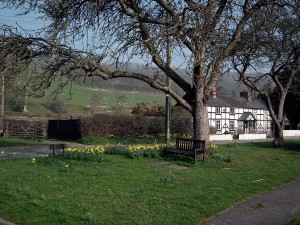 and hinted he might come visit here again. Yahooooo! We get to show him the humble world of the working cowboy.

Our youngest was just a little girl about the age of her oldest son when he was here last. In spite of being a bachelor he’s so good with kids; I’m sure they will love him when he comes as much as their Mom did. He reminds me a lot of my dad that way. Kids always loved my dad too.

Malcolm served as president of the Canadian Rodeo Cowboys’ Association in 1971 and 1972. During his term he was instrumental in starting the Cowboys’ Disability Fund and in laying the groundwork for the first Canadian Finals Rodeo, which was first held in Edmonton in 1974. Malcolm encouraged C.N. (Chunky) Woodward to begin the “Cowboy of the Year” award in 1970, and it has continued to be one of the most prestigious awards presented by the Canadian Professional Rodeo Association each year.

Hopefully we can get together with him  and his family for a visit when Tom comes over.

And when I go over, he said he could maybe take me around to some of the horse events he goes to. A whole different world than riding and roping on the bald prairies of Alberta, I’m sure.

I didn’t tell him how nervous I am to fly over a whole ocean after the turbulence I experienced flying over the Great Lakes on my way back from Ottawa. But being brave isn’t about not being scared, it’s about doing it any way. I can do that like I do here every time I have to deal with those rotten old Charolais bulls (man, the French must have hated us).

Well this girl gave us a merry chase yesterday #46.

We had to rope her calf, get it in the trailer, then coax her in too. After a long day I was not very pleased with her.

Man! Am I tired! I can only imagine how tied Pic is

An open gate and a couple hundred head in the wrong pasture didn’t take too long to get straight with some good help. It’s always fun when one of or girls comes to help us.

But the rest of the day was the kicker. Cleaned out a big field in preparation for them leaving for home on Wednesday. Just takes a lot of hard riding.

When things speed up it gets a lot harder and scarier. My horses have learned to pay attention when I say: watch yer step. Gopher holes, badger holes, rosebush, sage brush and alkali, ditches-with and without water, blowouts all make for an interesting ride on the dead run trying to head off a Gelbveigh cow ( I’ve said how I feel about those cows before and I’ll leave it at that. Grrr) that’s bent on taking the whole herd the wrong way. Oh well, I wouldn’t trade my problems for some one else’s (including the Gelbveighs).

When I say I was checking the sand hills for cows I mean sand hills. 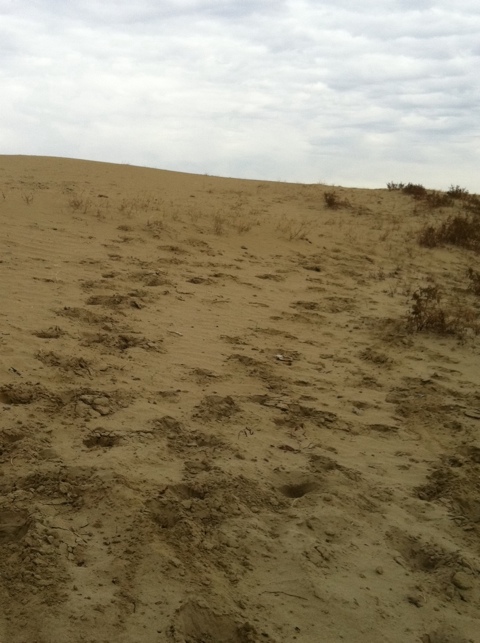 of course there are only a few open sores like this one now, most are grassed over, but underneath is still sand like this.

I got kind of chilled. Maybe should have started a little later when it warmed up a bit but I did find 4 misplaced pairs and moved them on my own. So I guess I earned my keep today.