Some days the inevitable happens. . . yes, going to the city. I’m glad it’s a long drive home and I have the time to recuperate.

After 6 months of hanging around cows it is such a shock to my system to see all those people in one place, all the rushing around, all the traffic. And when I think there are around 7,999,000,000 billion more on the earth (Calgary’s population is around a million now) I just get overwhelmed.

Hope its another 6 months before I have to go there again.

Something has been bothering me and I need to get it off my chest. It’s about the day of takeout. One incident keeps coming up like heartburn does and just kind of burns inside me.

A calf got separated from his momma and in his confusion gave everyone quite the run around being chased through various fences by more than enough overly enthusiastic once a year cowboys.

He eventually slowed down and was roped and tied till a trailer was brought out to load him up and take him back to the corrals.

One of the young fellows (that I have had a problem with before) took his heel and stepped on the calf’s nose, hard. I didn’t quite get what he was doing till he did it again and made the poor calf bawl. Then he said: “serves you right!” I told the young fellow that wasn’t right, that the calf was just trying to save his (meaning his own) life.

Some people just don’t get it. This young fellow who is a purebred Simmental breeder should know better. I wish I had told him meanness never pays, not meanness to man nor meanness to animals. We would all do well to remember “There is no greater wisdom than kindness.”

Cattle are just cattle. They get confused and do what seems to us like stupid things and may cause us a lot of frustration and extra work but . . . no where does it give us justification to be mean spirited.

That young fellow didn’t do that calf any favours by embedding in that poor animals mind fear and loathing for mankind nor did he do himself any favors.

I may never look at that him again and not think of that defining moment. At least it would take a lot of witnessing him being kind to bury it till I didn’t remember it again. I can’t speak for the others there who saw that and how they felt but I was glad I said something. I just wish it had been more.

Actually relaxing a little this morning. The lost were found yesterday and sent home. My cowboy was invited this morning to one of the neighbors to check for anything of ours that might be in his place. Pretty sure one of our bulls is still over there.

There is a freezing rain warning in effect for our area and it’s the first day of the “terrorist attack” (aka deer hunters). At least they aren’t quite as bad as the crazy antelope hunters. Makes it a good day to lay low.

So I was thumbing through the Western Horseman magazine. I actually have an old edition from the fifties. But even ol me isn’t as old as that publication. They started in 1936. It was one of my staples even as a very young cowgirl, all just a dream back then.

The cover was painted by Tim Cox and entitled “A Lot Like Heaven”.

That so touched my heart. As I think back on all the craziness from this year’s work and even other years and how hard it can be and dangerous I know he so hit the nail on the head. It is a lot like heaven, those peaceful still moments as the sun first breaks the horizon with the touch of your horse’s breath on your face or sitting in the saddle under the black expanse of a magnificently starry night while you and your horse watch the birth of new life in snow that seems to stretch unobstructed all the way to the north pole. Or like a couple of days ago when Pic and I had the privilege of watching 2,000 head come out of the fog, file silently through a lonely gate, and disappear back into the fog. 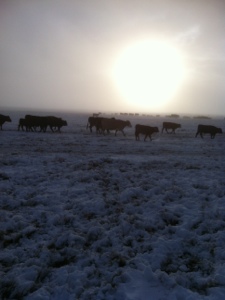 There are those moments because I’m lucky to live the life I do that I can feel heaven so close. Tim Cox is exactly right; it is a lot like heaven.